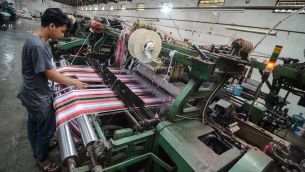 Chairman of IKATSI, Suharno Rusdi stated that his party still sees the group of importers under the guise of producers actively involved in revising PERMENDAG 64 2017 to protect their import activities. This is also evident from the exclusion of the industry which is currently depressed due to import floods. "This revision is only done by a group that gave birth to PERMENDAG 64, later it will be eleven twelve, revision is only a formality without really being able to improve the condition of the textile industry," Rusdi said.

One important thing that must be done by the government is to immediately verify the holders of API-P and API-U who import from 2018-2019. "If the company is proven to violate the rules, it must immediately be blacklisted, both the name of the company and the name of the owner. "Even though it is a bit strange, because the indications of the holder of the API-P bulging already existed before 2017, but why are they still given import recommendations" Rusdi said. Not only textile PLB, IKATSI also highlighted PLB E-Commerce which became an entry point for apparel sold online. ”HS 61-63 in 2018, imports rose 36% to USD 1.17 billion, semester 1 of this year has reached USD 600 million , IKM garment and convection began to be depressed" he explained.

Regarding the safeguard agenda being discussed at the Indonesian Trade Security Committee (KPPI), IKATSI considered that the decision on the amount of safeguards was entirely in the hands of KPPI.
He said he was surprised if the Indonesian Textile Association (API) maneuvered to direct the amount of import duties from upstream to downstream only by 2.5% to 20%. He suspects that there is a deposit from the merchant importer group who still wants to perpetuate import activities that have been proven to damage the industry.

"For fiber, the MFN (Most Favored Nation) import duty alone is 5%, Yarn 10% -12%, Fabric 20% and Garment 30%, the period instead directs the amount of safeguard below that," he said.
"Especially if you use the Free Trade Agreement (FTA) form, it's already 0%, so later it will only be safeguards without additional MFN," he added.
He said he was also suspicious because the proposed concept of API was only in the context of harmonizing upstream and downstream tariffs not in the context of industrial recovery. Whereas safeguard is an instrument of trade remedies taken by a country when the industry is injured due to a surge in imports with the application of additional tariffs so that the industry recovers. "If the industry does not recover it's useless, the name is not safeguard, the name is harmonization of tariffs" Rusdi said

For this reason, IKATSI asked the palace to continue to monitor the agenda of saving the TPT industry. "The President has warned of the possibility of a world economic recession and we must minimize its impact on our country, and the textile industry is a safety net to reduce unemployment," he concluded